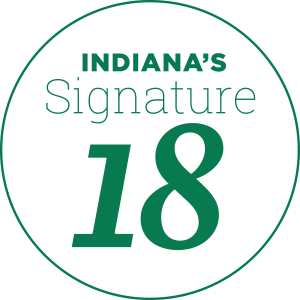 Visit Indiana Golf is highlighting the best 18 golf holes from 18 different public golf courses across the Hoosier State. Hole 8 on Indiana’s Signature 18 is located on The Donald Ross Course at French Lick Resort. French Lick is nestled among the hills of the Hoosier National Forest in southern Indiana.

This classic course, designed by iconic architect Donald Ross, underwent a $5 million restoration in 2007. The course is par 70 and golfers can play to 7,000 yards. It includes over 100 of Ross’ trademark bunkers, thirty-five of which are original to the course that Ross constructed in 1917. The Donald Ross Course has been rated the No. 2 public course in Indiana by Golfweek every year since 2011.

Hole #8 has probably not changed too much since the course opened for play in 1916. The most telling evidence is the square-sized shape of the green. Historically, nearly every green was in the shape of a square because it was easier to cut and maintain. On this right-to-left dogleg par 4, make sure you drive it far enough to have a clear view of the green.

On your approach to the green, aim for the back or middle of the putting surface, because there’s a severe false front to this green. When was the last time that you saw a square-sized green?

Learn more about The Donald Ross Course and many others in Indiana when you visit www.VisitIndianaGolf.com.